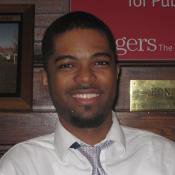 Sean Brown is the founder of Young Urban Leaders, which is devoted to serving the next generation of leaders. Sean served in AmeriCorps VISTA in New Orleans and in Camden. In Camden, he worked at CamConnect doing community outreach, sharing the data and statistics with community organizations and the residents of the city. After his AmericCorps term, he worked at Camden Community Connections, where he was responsible for database management, training students in the after school program, and assisting with intake and training for the STRIVE program. Sean has served on the CamConnect board of trustees since 2006. Sean lived in Camden until he was 8 and moved back when he was 20 to serve the city. Young Urban Leaders was founded while Sean was an undergraduate student at Rutgers University. He received his BA is Urban Studies in 2010. Sean is working on a master’s degree in Public Policy with a concentration on Community Development. Sean served on the Camden school board 2010-2013. He served as the chairman of the policy committee. Sean has been featured in the Courier Post’s Top 35 leaders under 35 years of age. In 2010, Next American City included him as of the “Best and Brightest.”