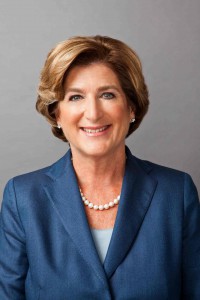 As a Fortune 500 Company with deep roots in Camden, the Campbell Soup Company has continuously invested its clout and capital in the South Jersey region. In recognition of this legacy, WRI is honoring Campbell CEO Denise Morrison as its Private Sector South Jerseyan of the Year on April 28th at the 15th Annual Walter and Leah Rand Awards and Scholarship Dinner.

Denise Morrison became Campbell’s CEO in August 2011, after eight years at Campbell and more than 30 years in the food business. She is Campbell’s 12th leader in its 145-year history and the first woman to take the role. Previously, she was Executive Vice President and General Manager of Kraft Foods’ Snacks and Confections divisions. Her food business experience also includes senior leadership roles at Nabisco, Nestle and Pepsi-Cola. She began her career at Procter & Gamble. Ms. Morrison earned her B.S. degree in economics and psychology from Boston College, graduating magna cum laude. Her education in business began early, with her father (a Bell and AT&T executive) instructing his children on business, money, sales, and profit margins at the dinner table.

Ms. Morrison is committed to connecting with the next generation of business leaders, and has worked to mentor young women in particular through programs like Camp Campbell. She is a founding member of the Healthy Weight Commitment Foundation, an initiative of manufacturers and retailers to combat obesity in the marketplace, workplace, and schools, and also serves on the board of the Grocery Manufacturers Association. She was named as a Vice Co-Chair of the Consumer Goods Forum in 2013 and serves on the organization’s board. Ms. Morrison was named to President Barack Obama’s Export Council in 2012. She was elected to the MetLife, Inc. board in February 2014. She is a member of the board of directors for Catalyst and is regularly named among the Fortune and Forbes Most Powerful Women.

Denise resides in Princeton, N.J. with her husband, Tom, and they have two grown children.