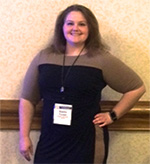 On November 16th, 2016, WRI Project Assistant Shelby Tucker gave two presentations at the 72nd Annual Meeting of the American Society of Criminology, under the direction of Dr. Michelle Meloy (Professor, Department of Criminal Justice).  As part of WRI’s fundamental structure, students who work at the Institute are provided opportunities to advance their careers through academic research.  Assisting students in the preparation and presentation of original research targeted on topics of interest in South Jersey helps cultivate a new era of policy professionals ready to step into the workplace. The first presentation given was based on her masters’ thesis and examined the effect mentors have on educational attainment of at-risk youth. Shelby’s second presentation detailed educational, social, familial, communal, criminogenic and protective factors which impact college attendance of at-risk youth.

In The Pathway out of Socially Disorganized Neighborhoods into College Classrooms: Voices from Inner City Youth, Ms. Tucker focused on understanding which factors most affect youth on their way to college. The study found families, especially mothers, socialize youth with an expectation of attending college. Families promoted degrees as tools which lead to improved career options, and potential exit strategies out of disorganized neighborhoods. It was often not just the parent(s) of participants, but also other family members who heavily encouraged youth to pursue a college education. The study also found that more than 75% of participants self-selected out of Camden City Public High Schools in order to attend a parochial, private, charter, or magnet school, further underscoring an expectation of college attendance. Some participants also spoke of their ambition, resilience, and perseverance as reasons why they made it to college.

Both research projects confirm the concept of resiliency. Students routinely survive the desperation of cities marked by unemployment and crime to ultimately walk into college classrooms.