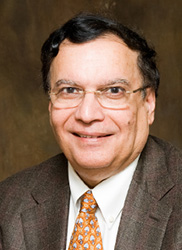 In recognition of continued contributions to energy research, the development of a $320 million business complex, and an investment into future jobs creation in Camden City, the Walter Rand Institute for Public Affairs is honoring Dr. Kris Singh—Founder, President and CEO of Holtec International—as its Private Sector South Jerseyan of the Year on Thursday, May 4th at the 16th Annual Walter and Leah Rand Awards Scholarship Dinner.

Dr. Sighn’s commitment to building and working in Camden is driven by a strong ethical vision and he is confident the Holtec site, “…will be ground zero for the renaissance of manufacturing in America.” Originally announced in 2014, the development of Holtec’s Technology Campus in South Camden has already provided economic benefit to the city, as the company purposefully hires local contractors and does business with area vendors. Engineers and other employees from Holtec’s Marlton site have begun to relocate to the city and manufacturing operations, once scheduled for early 2018, will likely begin before the year’s end. In the interim, Holtec is developing curriculum for local high schools and colleges to train up the next generation of manufacturing professionals.

A widely published author in scientific journals (with over 70 technical papers, one textbook and numerous symposia volumes) and a prolific inventor (with over 60 patents), Dr. Singh has led Holtec International since the company’s inception, building it up to a technological powerhouse respected for its engineered goods and services around the world with nine major operations centers in three countries and an active business presence on four continents. Over 120 nuclear plants around the world employ Holtec’s systems and equipment in safety-significant applications, many based on Dr. Singh’s patents. In keeping with its reputation as the nation’s premier energy technology innovator, Holtec International is the world’s only energy company engaged in the global technology race to develop a “walk away safe” small modular reactor without relying on any government subsidies.