Each year, WRI recognizes South Jersey’s leading citizens in the public, private, and nonprofit sectors. WRI’s honorees join an esteemed list of “South Jerseyans,” demonstrating an unwavering commitment to our region and its residents through service.The awards are presented during the Walter & Leah Rand Awards and Scholarship Dinner. 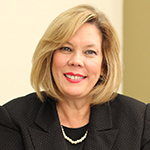 Nilsa I. Cruz-Pérez was born and raised in Bayamon, Puerto Rico.  She studied at the University of Puerto Rico, majoring in Political Science, while working for the Popular Democratic Party.  In 1981, Nilsa joined the U.S. Army and was stationed in Mainz Military Community in Germany.  While serving, she studied at the U.S. Quartermaster School, Big Bend Community College, Temple University and the University of Maryland (overseas division). In 1987, she was honorably discharged from the military.

In 1991, Ms. Cruz-Pérez relocated to Camden City where she served as an Executive Assistant to the Vice President of the Cooper’s Ferry Development Association.  She later joined the office of Camden Mayor Arnold Webster as an Executive Assistant, serving as a liaison between the Mayor and constituents.  In February of 1995, she was elected to the New Jersey General Assembly, serving from 1995 until 2010.  Appointed to fill an unexpired term, she went on to be elected as the first Hispanic woman State Legislator in New Jersey’s history. As a member of the New Jersey General Assembly, Ms. Cruz-Pérez served as Chairwoman of the Consumer Affairs Committee and as a member of the Housing and Local Government Committee, the Human Services Committee, and the Military and Veterans Affairs Committee.  A former Assistant Majority Leader, Assemblywoman Cruz-Pérez was selected as a Deputy Majority Leader in January 2008.

As an Assemblywoman, Ms. Cruz- Pérez sponsored some very significant bills.  One of the most important bills that she sponsored that was enacted into law was the Camden Municipal Rehabilitation and Economic Recovery Act of 2003.  She also sponsored bills that became law changing the composition of the Executive Commission on Ethical Standards and the Joint Legislative Committee on Ethical Standards, establishing a grant program for Sheriff’s Departments to purchase body armor; allowing the eviction of certain offenders from public housing projects; and restructuring of the State’s Child Protective Services Division, as well as repealing the last New Jersey law discriminating against any ethnic group.

Ms. Cruz- Pérez continued to serve her community through her work at the Camden County Improvement Authority from 1998 to 2013. As the Outreach and Community Coordinator, she collaborated with local officials, developers, investors, and nonprofit organization to facilitate communications and project development through the County. Ms. Cruz- Pérez was then chosen to head the Camden County Department of Constituent Service and the Office of Hispanic Affairs. As Director, she designs, direct and implements programs and initiatives that bring government services to communities that are in need.

Ms. Cruz- Pérez has continued her relentless commitment to public services through the many boards and commissions on which she volunteers to serve. These include the Rutgers University Board of Directors, the South Jersey Eye Center and the Camden County Committee. She has also served as a Board Member for the Camden City Zoning Board of Adjustment, Volunteers of America, Steininger Behavioral Care Services, Camden Mayor Advisory Board, National Puerto Rican Coalition, NJ Redistricting Commission, NJ Congressional Redistricting Commission, Camden City Committee, Vice Chair of the NJ State Committee and as a Trustee of the Battleship New Jersey.

On December 15, 2014, Ms. Cruz Pérez was sworn in as State Senator for New Jersey’s Fifth Legislative District. She serves as the Chair to the Senate Economic Growth Committee, and sits on the Senate Budget and Appropriations, and the State Government, Wagering, Tourism & Historic Preservation. She is also a member of the Joint Committee on Affordable Housing.

Nilsa Cruz-Pérez is a mother of three, including two sons, Luis and Angel, and a daughter, Linette.  She resides in Barrington with her husband, Luis.