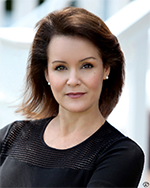 Amy Osborn is a vice president and private banker for Republic Bank in Philadelphia and South Jersey.  An Ocean City native, she is the product of South Jersey schools, including Ocean City High School, Cape Atlantic Community College, and Rutgers University-Camden.

With a career centered on service, this former Miss New Jersey has been a voice for veterans for more than 30 years. Amy began her career with the USO of Metropolitan New York. She later served at the NJ Department of Military and Veterans Affairs, and has entertained our troops around the globe, as a performer with Armed Forces Entertainment, under the US Department of Defense. She is a recipient of the James C. Gates Distinguished Service Award, awarded by the VFW Department of NJ, for her efforts to help veterans find gainful employment.  Amy has served on the Board of the NJ State Veterans Home at Vineland, and currently serves on the Selective Service Board, both of which are Governors’ appointments.  She is proud to have represented veterans’ service organizations on President George W. Bush’s “Hire Vets First” Committee.

For fourteen years, Amy ran her own consulting firm, Capitol Concepts, during which time she served as Finance Director for many campaigns and political organizations. She also served as a Delegate to Turkey with the American Council of Young Political Leaders and on the Advisory Council of the Hudson Union Society in Manhattan; was elected State Committeewoman from Camden County to the NJ Republican State Committee; and created and authored a regular article for the NJ Conference of Mayors Magazine, titled “Hot Topics, Cool Mayors”.

Amy currently serves on the Board of Trustees for the Southern New Jersey Development Council, the Board of Directors of The Patriot Fund, the Leadership Council for Maryville Treatment Centers, and is active with the Multiple Sclerosis Association of America, headquartered in Cherry Hill.  A lifelong advocate for the welfare of animals, Amy founded Pints 4 Pets, a nonprofit that brings beer enthusiasts together with animal lovers, to raise funds for local shelters.